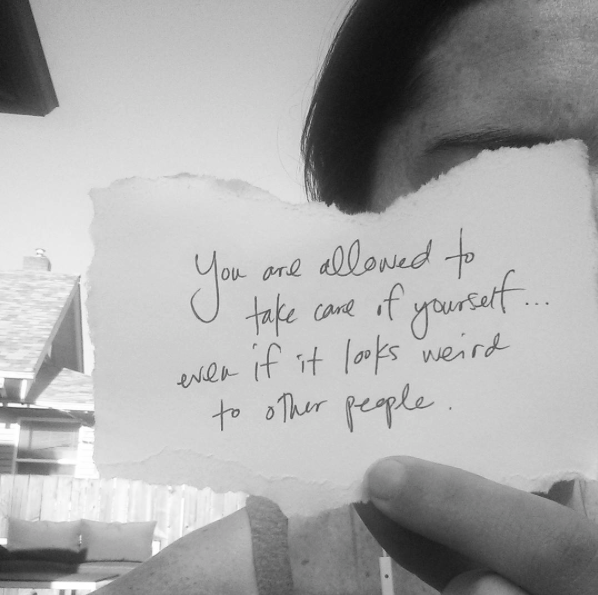 “The brain is a monstrous, beautiful mess.” ~Susannah Calahan, Brain on Fire:  My Month of Madness

Let’s talk about how your brain is kind of a jerk.

This is largely because it has a built-in negativity bias, and is — by design — more finely attuned to bad stimuli than to good.

Simply put, this means that you are more deeply impacted by negative thoughts, emotions, and experiences than by positive ones — both in the moment and over the long-term.

Evolutionarily, this makes sense. In a dangerous environment, being on alert for potentially harmful situations — and preparing for the worst case scenario — is how we managed to survive until now.

In the modern world, however, holding this bias towards negativity typically isn’t so helpful. And — in the absence of lions and tigers and wooly mammoths — it often instead takes a toll on your sense of self-worth and capacity for self-compassion.

Which is why it takes actual effort to focus on the positive — because the brain’s innate tendency is to do just the opposite.

And I don’t know about yours, but my brain can be a total asshole.

I recently posted a photo to social media from my days in college, and openly discussed all the ways I was unhealthy and unhappy at that time in my life, in spite of any and all evidence to the contrary.

And revealed multiple ways I had been secretly hurting and hating myself, even while I presented a relatively put-together persona to the general public.

I felt compelled to share these things after being reminded several times in the weeks prior just how far I have come since that photo was taken, and after seeing how many people still struggle with the self-destructive thoughts and beliefs I was experiencing during that period of my youth (and for a handful of years afterward).

I am starting to talk about my experience of these things more freely because I want anyone who is still in the thick of it with body (and/or self) hatred or disordered eating or obsessive exercise or self-injury to know that the feelings don’t have to be permanent.

And that it is possible to move away from that place, even if it feels totally out of reach right now.

I also believe that we need to be having a more open and honest dialogue about all of this, because it is only by having a conversation devoid of shame or blame or fear that we can start to truly heal as individuals and as society as a whole.

And I am ACTUAL PROOF that this is possible.

Because here’s the good news:  You don’t have to blindly believe anything your brain tries to convince you is true. And you can choose to challenge your own thoughts, question their validity, and reject them if they don’t serve you.

Take, for example, my trajectory over the past 12ish years. Which has looked a little something like this: 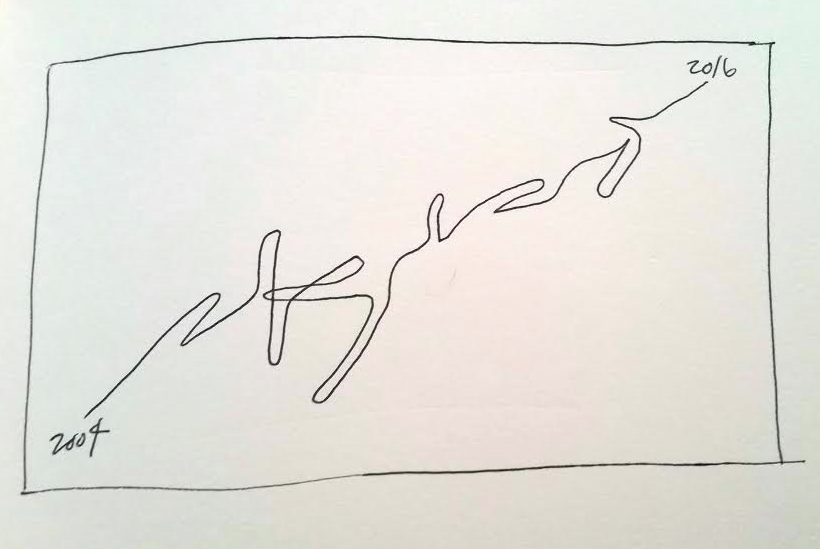 (Note that portion about a third of the way in, during which I entered and exited a not-so-healthy relationship and got temporarily reacquainted with some less-than-good-for-me habits.)

It was definitely not a straight line from point A to point B.

And I have certainly not reached some sort of magical endpoint after which I never have to wrestle with self-destructive impulses and negative self-talk ever again.

Nope. These things still show themselves intermittently in my life — after all, I’ve done a pretty decent job over the years of strengthening the neural pathways in my brain responsible for their existence.

Also:  Negativity bias, you guys. It’s a bitch. Especially when combined with super strong neural connections that carry around messages like, “You’re worthless,” and play them on repeat in your head.

That being said, I hear these tracks a lot less often than I used to. And I have put in countless hours intentionally strengthening much more positive and productive neural pathways in order to crowd out and drown out the less compassionate assertions to which my brain likes to cling.

It is difficult for me to pinpoint the exact day I decided I’d had about enough of feeling terrible in my body and feeling horrible about myself. But deciding to take that first step towards change was the best — and most terrifying — thing I’ve ever done for myself.

And it is the best thing I continue to do for myself every day.

Your brain can be a total jerk, but it’s also so freaking malleable — both ancient wisdom and modern research tell us this is true.

Science is finally catching up to centuries of meditation and other awareness practices to demonstrate that your brain is not a fixed entity incapable of being rewired after you reach a certain age. On the contrary, you can learn and grow and actually alter your neural connections up until the day you die.

Which is pretty amazing, if you ask me.

This process does, however, require consistent effort on your part.

It requires CURIOSITY. And AWARENESS. And the capacity to BE UNCOMFORTABLE for a while.

And the WILLINGNESS to question your assumptions about everything.

Because if you’ve spent a lot of years feeling not so great about yourself, it’s probably going to feel super weird at first to entertain the idea of something different.

So be patient with yourself and with the process. Ask for help. LOTS of help. Surround yourself with people who leave you feeling better than before they arrived, and stop spending time with those who reinforce the unhealthy pathways you are working to rewire.*

And remember:  You are allowed to take care of yourself. Even if it looks weird to other people.

For additional information about just how amazing your brain is, check out Mindsight:  The New Science of Personal Transformation by Daniel J. Siegel, MD. For those of you who are as science-y as I am, you might also enjoy this episode of the Rewild Yourself Podcast with Daniel Vitalis, on which he speaks with Dr. Siegel in more depth about the concepts of brain and mind, and the intersection of interpersonal neurobiology and quantum physics.

You might also enjoy Breaking the Habit of Being Yourself:  How to Lose Your Mind and Create a New One by Joe Dispenza, DC. for some more practical tips on how to begin exploring this process on your own.

And for a less science-laden view of essentially the same concepts, I recommend anything and everything by Pema Chodron, but especially When Things Fall Apart:  Heart Advice for Difficult Times and Living Beautifully with Uncertainty and Change.

And lastly, PLEASE check out one of my favorite books ever, There is Nothing Wrong with You:  Going Beyond Self-Hate by Cheri Huber. This book legitimately changed my life.

*Seriously. Stop it. And don’t feel guilty. You can care about people and still decide not to spend time with them.